Long Branch, NJ / June 3, 2020 / The dangers of addiction are something that Stephen Shabot understands very well. Though sober for many years, he had to fight to achieve a healthy level of sobriety. He believes that everybody’s case is different and that becoming drug-free is critical to do on your terms. The following tips are a big part of how Shabot reached a healthy and healing level of temperance in his way. 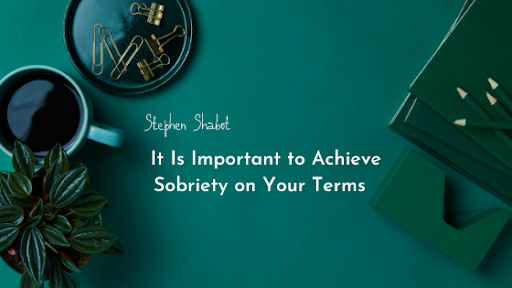 When addiction strikes a person, Stephen Shabot argues, they are going to change in ways that will make them hard for even their closet loved ones to recognize. People will lie and steal to feed their addiction and hurt those whom they love. Stephen Shabot states that these changes will be unique to each person and must be considered before you try to obtain sobriety.

First of all, everybody’s physical and mental health is different, he states. Some people may experience extreme physical reactions, while others do not. Likewise, Stephen Shabot says that mental health disorders, such as anxiety and depression, are different for each person. These factors complicate recovery, he states and can make it hard for a person to achieve sobriety properly.

As a result, Stephen Shabot argues that people must take an in-depth look at their inner core to get an idea of what they want to do to change themselves. It isn’t just enough to go through rehab, he argues. People who want to become sober must commit to staying drug-free to transcend their addiction and work on every element of this problem in a meaningful way.

Stephen Shabot states that before attempting to quit any substance, it is essential to meet with a professional rehab facility. These groups have medical and psychological treatments that can help an individual recover. Once in a program Shabot states that it is essential to be honest and open with these recovery experts to assess the level of your addiction adequately.

Then, it is crucial to find a care option that meets your needs. For example, Stephen Shabot states that some people find great benefits from psychotherapy because it allows them to talk about their emotional struggles. People often go through talk therapy to find that their treatment specialists’ insight is strong enough to provide a guiding light through challenging treatments.

Just as importantly, Shabot stresses working with friends, and family members after treatment is over. Talk to these individuals about what kind of support you need. Then, it would help if you created a team that can keep you focused on recovery and healthy in the face of triggers and relapse risk. The exact steps that you need to take may vary depending on your needs, he says. So it is important to be open to changes in your program.